Located in the Adaži area not more than 25km away from Riga, I had the opportunity to visit ‘Eimuri’, a dairy farm owned by Gunar and Sigrid Ziemeli.

There are 117 dairy cows producing around 1700 litres of the highest quality milk daily. The milk produced is delivered to the cooperative company ‘Trikata KS’. The farmers cultivate 184 ha of land, of which 180 ha are rented and only 4 ha are owned by the farmer. 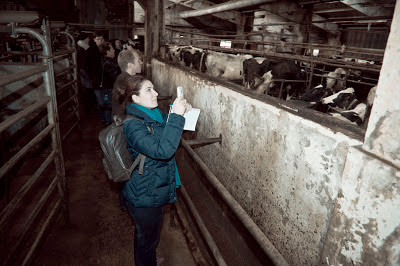 The farm was founded in 1991 by the Ziemeli couple after buying out a milk production complex – ‘Briljanti’. It was based on shares in a collective farm ‘Adaži’, which was a model farm in soviet times. Gunar Ziemelis is a professionally educated specialist in animal husbandry; a zootechnic engineer who in soviet times happened to head this same dairy complex. ‘Briljanti’ was set up with the support from the Communist party to popularize achievements of the Soviets in agriculture. In 1987 this farm was visited by the former USSR Secretary-general Mikhail Gorbachev. After the fall of the Soviet system it turned out that such model farms were not quite efficient and economically viable, hence major investments were required.

Today the farm is facing difficult circumstances. It requires further investments and modernization. The situation is aggravated by the fact that the farm is located in urban territory, where prices of land may reach up to €15,000 – €20,000 per ha. The fact that the farmer owns just 4 ha limits his ability to expand operations. Although the daughter Jolanta, is actively involved in the farm, according to the farmer “the future of the farm depends to a great extent on the State and EU agricultural policy”.

After going through the various areas of the farm, it was clear that it is in dire need of investment. The infrastructure is unfortunately in shambles. The fact that DG Agri has organised such a visit, goes to show that the EU wants the citizens to realise that funding mechanisms are not addressing all the needs. There are various reasons why such farms are still facing such crises.  Unless all the member states realise that each and every country has its own particular situations, redistribution of funds will continue to be a very painful exercise. Awareness about the challenges being faced in the agriculture industry across Europe is key to allocate the funds in the best possible way.