Spring is round the corner and it’s starting to feel a bit warmer here in Malta (unlike the rest of Europe). At this time of the year, there is nothing more relaxing than to go out for a walk and enjoy the Maltese countryside. Unfortunately we are starting to see photos shared on Facebook showing litter in rural areas.  Most probably such litter has been left behind by irresponsible picnickers.

Two MCAST Agri students, Chiara Demanuele and Eszter Papp, ventured outdoors today and walked towards Baħrija. They took the initiative of collecting some litter while there. The bags they took weren’t enough for the amount of trash there was but it’s a start. The litter ranged from plastic bottles and glass bottles to a keg of beer, pots, cans and much more. Chiara remarks that “if everyone took a garbage bag, when going out for picnics, hikes or other activities and picks up some litter, the country would look and feel much better!”

Well done girls for the team work and active citizenship! Today you have proved to be Litter Heroes. 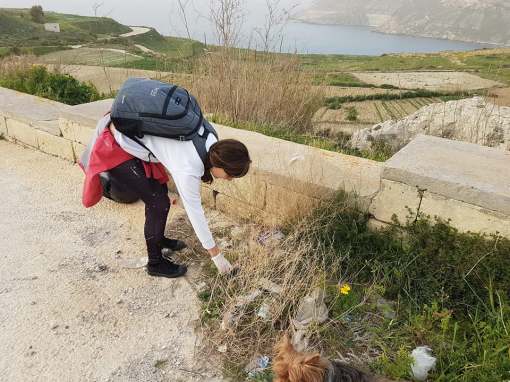 There are several initiatives in the Maltese islands to tackle this situation. The local government and local councils put in a lot of effort and hard work to keep our localities clean. Nonetheless, other initiatives such as “Making Malta Green and Clean” and “Żibel” show how much this issue is at heart to local people.

Making Malta Green and Clean has been launched by 89.7 Bay (a local radio station). It empowers locals to remove litter by spreading news of their good deeds. Żibel (literally meaning garbage in Maltese) is a community driven initiative having the motto; we clean, we educate, we innovate. Visit www.żibel.org to get involved.

Here are a few actions which in my opinion can help to alleviate the issue of littering in the Maltese countryside;

Jeanette has studied agro-ecosystems management and has been working in the agriculture industry since 1998.

Her experience ranges from employment in the public and private sectors, working in vocational training, volunteering in the third sector and contributing to start-ups and entrepreneurial activities.