A new project focusing on bird conservation and responsible capturing (trapping and hunting) is about to kick-start next week. ‘Aġġornat” is the name given to this project aimed for those interested in hunting and trapping, as well as the Maltese countryside. This awareness project is an initiative of a growing hunting organisation; Kaċċaturi San Ubertu (KSU). A series of six talks will be held in four localities around Malta and Gozo and will take place over the next few months. Sessions are free of charge.

The project is the first of its kind and is co-financed by the Conservation of Wild Birds Funding Scheme 2017. The fund is being managed by the Ministry for Sustainable Development, the Environment and Climate Change.

The speakers chosen for this project include officials from the Wild Birds Regulation Unit (WBRU), the Administrative Law Enforcement Unit (ALE), & the Environment Resources Authority (ERA), the Merill Rural Network and expert ornithologists.

The following are the subjects being covered during the information talks;

More information will be uploaded on the Facebook Page of Kaċċaturi San Ubertu. All those interested in the subject are invited to attend free of charge. 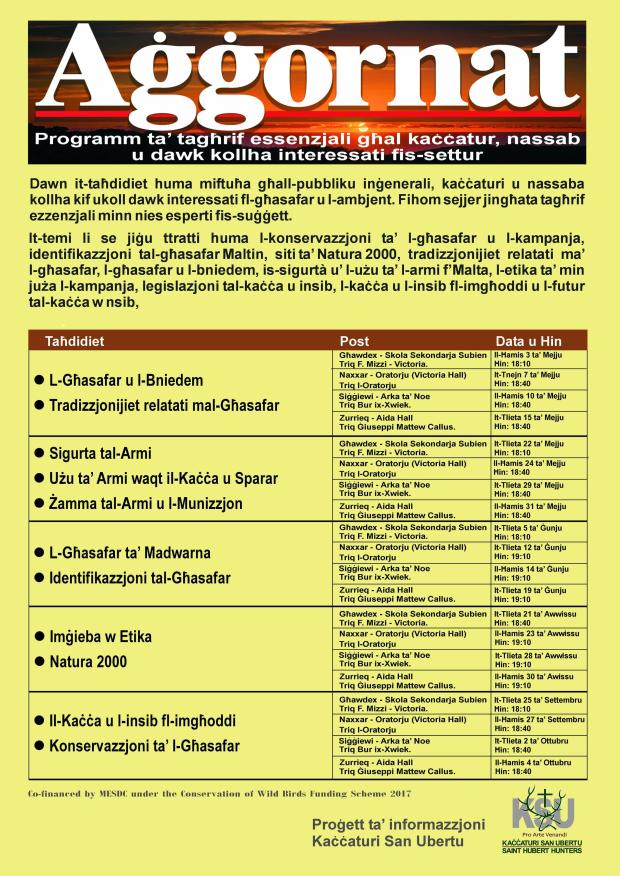